Established in 1961, St. Raphael Catholic School is a parochial grade school in the Diocese of Joliet, Illinois educating children in the formative years of kindergarten through eighth grade.

St. Raphael was the original name of Sts. Peter & Paul Church when it became a parish in 1846 and was also the name of its first pastor, Fr. Raphael Rainaldi.

Due to Naperville’s rapid growth, the Diocese of Joliet established a second parish & school in the city in 1960. Built on land donated by Harold and Margaret Moser, our faith community began in 1961 as a mission school to accommodate the overflow of students at Sts. Peter and Paul.

We emerged officially as a parish & school in 1963 when Fr. William Condon was introduced as our first pastor. Our first Mass was celebrated on June 30, 1963 in a converted classroom. At that time, Naperville had a population of 16,900.

Masses began in the “new church” (currently the school gym) in December 1964. St. Raphael School graduated its first class of 43 eighth graders on June 7, 1967. As our parish continued to grow, our current church was built and the old worship space was converted into the school gym.

St. Raphael is one of seven Archangels who stand before the throne of the Lord. He was sent by God to help Tobit, Tobiah and Sarah. At the time, Tobit was blind and Tobiah’s betrothed, Sarah, had had seven bridegrooms perish on the night of their weddings. Raphael accompanied Tobiah into Media disguised as a man named Azariah. Raphael helped him through his difficulties and taught him how to safely enter marriage with Sarah. Tobiah said that Raphael caused him to have his wife and that he gave joy to Sarah’s parents for driving out the evil spirit in her. He also gave Raphael credit for his father’s seeing the light of heaven and for receiving all good things through his intercession.

Besides Raphael, Michael and Gabriel are the only Archangels mentioned by name in the bible. Raphael’s name means “God heals.” This identity came about because of the biblical story which claims that he “healed” the earth when it was defiled by the sins of the fallen angels in the apocryphal book of Enoch. Raphael is also identified as the angel who moved the waters of the healing sheep pool. He is also the patron of the blind, of happy meetings, of nurses, of physicians and of travelers.

His feast day is celebrated on September 29th.

The curriculum stresses academic achievement within a Christian community in which the child feels that he/she is loved and respected by his/her peers as well as by the teacher.  Vatican II texts are used so that our theology is in compliance with the bishops of the world.  United with each other in meaningful liturgy and prayer, students come to an understanding of the Christian life.  At St. Raphael Catholic School, we are attempting to “teach as Jesus did.” 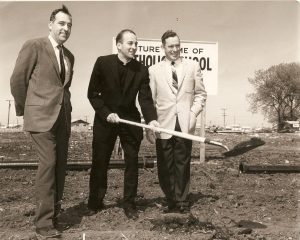 so many fond memories attending St. Raphael School as a child. I feel so blessed to be able to send my children here too.” Current St. Raphael Parent